The Spin series by Acer consists of lightweight and stylish convertible laptops that are fantastic for everyday use.

Sort by:
Best sellers Relevance Name, A to Z Name, Z to A Price, low to high Price, high to low
Showing 1-2 of 2 item(s)
List
Grid 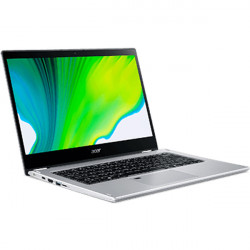 Certain models include a 4 stage -touchscreen that can be flipped 360 degrees and adapted to find the perfect view no matter whether you are carrying out an important task or simply just watching your favourite content!

With the models in this series typically weighing around 1.5 – 1.7 kg these sleek devices can easily fit in backpacks and won’t feel ridiculously heavy to carry. Additionally with certain models having up to 10 hours of battery life you can be confident that you can successfully carry out your chosen task before needing to recharge. Some models in this range also come equipped with a BlueLightShield which aids in reducing eyestrain during those long streaming or working sessions.

Additionally with the majority of the range boasting impressive Intel core processors and stunning Full HD screens its easy to see why this adaptable device is a favourite amongst many.

Can a stylus be used with the Acer Spin?

Yes certain models can be used with a stylus and some even come with one included in the box such as the Acer Spin 3 SP313-51N.

Can I expand the storage on an Acer Spin?

On some models yes , for example due it’s to range of ports the Acer Spin 3 can be expanded via a micro SD card or an external hard drive.

Is the Acer Spin series good for causal users?

Yes the Spin series can be utilised for many different casual everyday tasks such streaming your favourite shows and checking your social media.